PEPPERELL -- Art can serve many purposes in the context of religion. It can raise people's thoughts to the beauty of God and his creation; it can serve as a reminder of divine mysteries; and it can educate and spark conversations about the basic tenets of faith.

The new mural at St. Joseph Church does all of these things. Where there used to be a musty rug, the floor of the baptistry in the narthex of the church now has a mural of the Gifts of the Holy Spirit, represented as rays pouring out from a dove.

The parish decided to pull up the rug when traffic inside the church was low due to the coronavirus pandemic. Having a mural in its place seemed "sort of like a dream, but probably out of our reach," Father Jeremy St. Martin said in an Oct. 6 interview. Father St. Martin is the administrator of Our Lady of Grace Parish, which includes St. James Church in Groton as well as St. Joseph Church in Pepperell.

The answer presented itself when Father St. Martin attended a Fourth of July cookout hosted by Deacon Chuck Kelley. There, he was introduced to Deacon Kelley's goddaughter, Megan Barnes, a mural artist from Somerville. Her family showed him pictures of her work, and they started a conversation about art -- Father St. Martin had attended Massachusetts College of Art before becoming a priest.

According to Barnes, Father St. Martin jokingly asked her if she would like to paint a mural for church, and when she said yes, he replied, "See you Monday."

"We knew it was a miracle to be able to work on something this beautiful during a time where everything is so chaotic," Barnes said in a message to The Pilot.

Father St. Martin had a particular image in mind for the baptistry mural. Since baptism is the sacrament in which people first receive the Holy Spirit, he wanted to use a traditional image of the Holy Spirit pouring out its gifts.

Additionally, since the building's stained-glass windows tell the story of the Church in America, they decided to paint Our Lady of Guadalupe, the patron saint of the Americas, on the wall of the baptistry. Father St. Martin said adding her image was a way of asking her to help and protect them.

Barnes called the image of Our Lady "the finishing touch."

"She makes the work come together as a whole," she added.

The project took about two months to complete, with the final touches added in the first week of October.

"It took a lot of hard work but it was a lot of fun," Barnes said in an Oct. 2 interview.

In addition to Barnes, Father St. Martin, and Deacon Kelley, several other people, both parishioners and visitors, volunteered their time to help with the mural: a local college student, a visiting priest, a Confirmation candidate, and even a family with three children. One young person would come to watch, sometimes played the piano while they worked, and eventually expressed an interest in being baptized.

Barnes said the mural "was done with lots of love and support from everyone around us."

"Sometimes, different parts of murals can be tedious and annoying to do, but we made sure we never forgot how beautiful it would be and how happy it would make everyone who entered the church," Barnes said.

Father St. Martin said people have been "stunned" and reacted with "amazement, wonder, happiness, and joy" upon seeing the artwork. Children like to jump on the different colors, as they would on a playground.

"It causes children to dance. Children like to jump around on the image over the different areas of color, like a kind of hopscotch, and that's beautiful," Father St. Martin said.

"I love making people smile and I love making the church a new experience just by walking in. It can enhance your mood to see something so unexpected and spectacular," Barnes said.

Barnes and Father St. Martin both noted that the mural is also educational, sparking questions and conversations about what it represents.

"Because it has words in it, it gets people asking questions about meaning and talking about the gifts of the Holy Spirit," Father St. Martin said.

"It's a discussion starter and gets people talking about religion with a possibility to reestablish faith in someone," Barnes said.

On the topic of art, Father St. Martin said he recommends Pope St. John Paul II's "Letter to Artists," which is available on the Vatican website.

"All of us are in the image and likeness of God because we are creative like God, we can make things, and a lot of our happiness has to do with fulfilling our desire to be artists, to be like the Artist," Father St. Martin said. 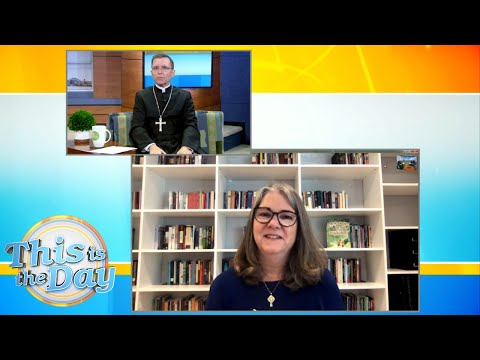